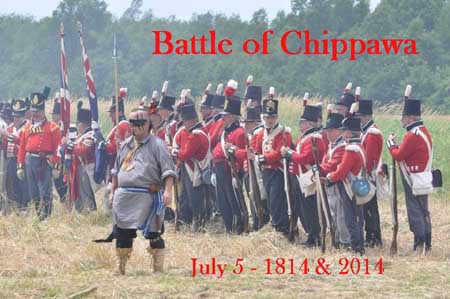 Here, on July 5, 1814, an American army under Major-General Jacob Brown launched the last major invasion of Canada during the War of 1812.  The Americans defeated British and Canadian force commanded by Major-General Phineas Riall consisting of regulars, militia and Aboriginal warriors.  During the engagement, about 200 men were killed and over 500 wounded.  After four months of heavy fighting, with major action at Lundy’s Lane, Fort Erie and Cooks Mills, the invaders were forced back to the United States.


Saturday saw the recreation of the Battle of Chippawa and Sunday was Lundy’s Lane.  Lundy’s Lane was very important in the history of the Incorporated Militia as they were part of the force that came back to the area after the Battle of Chippawa.  Our Colours were on the field for the Battle of Lundy’s Kane.  It was a first for the Colours as the actual Incorporated Militia Colours did not arrive until 1822, seven years after the war ended.  They can be found in the Canadian War Museum today.

Many of the photos are c/o Deb Brown, Denise Lundgren and Darlene Kingstone


Additional information of the Battle of Chippawa can be found at: http://www.eighteentwelve.ca/?q=eng/Topic/51 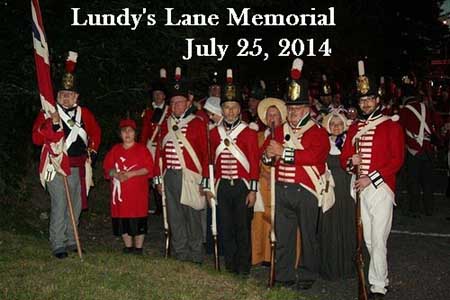 On July 25, 1814 at 7:30pm the "fiercest and bloodiest battle of the War of 1812" began in the neighbourhood  of what is now Drummond Hill Cemetery, Lundy’s Lane Niagara.  This "night" battle continued until the daybreak with many casualties on both sides.

To commemorate the 200th Anniversary of Lundy's Lane members of the Incorporated Militia of Upper Canada along with their Campfollowers partook in the evening event.

A wreath was laid at the stone memorial by Doreen and Bernadette to remember the many sons, husbands and other males lost in 1814.  This was followed by an honour guard lead by Captain Phil Mozel and privates Rod Blair, Barry Mapes and Brent Thomas.

After the wreath ceremony was finished, this "hearty band" of IMUC walked down Drummond Street to meet up with our "Colours" being carried by Richard Feltoe.  We then continued to walk the original historic route taking us to the Battlefield.  Over 500 participants who had registered for this walk marched along singing "Rule Britannia" to keep in step.  Beside us also marched members of the 41st Regiment Foot and the 1st and 2nd Lincoln Artillery.

At the Battlefield a different style of re-enactment was to take place.  With a LIVE storytelling performance by the neXt Theatre Company portraying the main characters such as Britannia,
Drummond, Norton, Brown and Rebecca the battle story was told.  A mini-engagement took place to help bring this story to life...

Many thanks to Doreen, Debbie M., Heather and Nancy for the invaluable pictures taken to help "remember" the night. 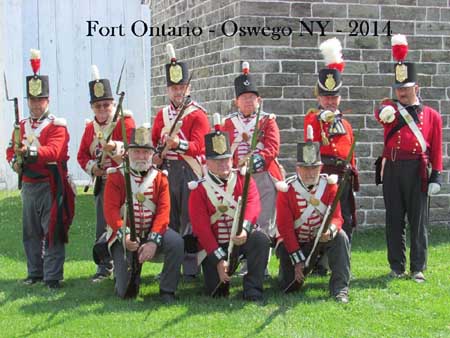 The Incorporated Militia covered two events this weekend. Several members of the IMUC Line and the Campfollowers joined the Lundy's Lane Historical Society at their memorial on Friday night, July 25, exactly 200 years after that pivotal battle!

While those members were in Niagara Falls, others from the Incorporated Militia participated in the Fort Ontario event in Oswego NY. At the invitation of Paul Lear, IMUC and the Canadian Fensibles took the fort from the local militia and US Regulars.

Saturday evening concluded with an incredible fireworks display put on by the city!


Further information about the Battle of Oswego can be found at: http://www.wcny.org/education/war-of-1812/the-battle-of-oswego/