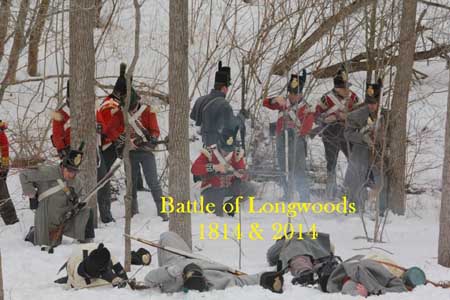 The attending members of The Incorporated Militia of Upper Canada would like to thank The Upper Thames Military Re-enactment Society for including us in the commemoration of the 200th anniversary of the Battle of Longwoods.  Usually we participate in the battle in the spring, not under the winter conditions of the original battle.  The organizers, The Royal Scots did an exemplary job as usual.  A commemorative cairn was dedicated with a Drum Head Ceremony with members of Canada's current Armed Forces assisting.

More pictures c/o Dave Westhouse, Doreen Mapes and the Facebook pages of Tom Fournier and the Royal Scots can be found at:


Further information provided by the Royal Scots can be found at: