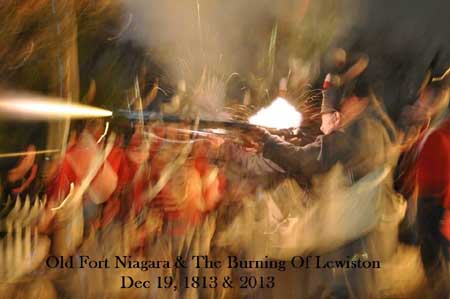 Exactly 200 years ago to the day The Forces of King George took Old Fort Niagara by bayonet in the early morning hours.  Members of the Incorporated Militia of Upper Canada and the other Regiments of the Crown Forces were up at 3:00 AM to assemble for the 5 mile (8 km) march to take the fort.  The weather cooperated and the fort fell, again without firing a shot.

Later that day  the 200th Anniversary of the Burning of Lewiston and the rescuing of the towns people by the local Tuscarora was re-enacted on Center Street .  The end of the street  battle scenario was the cue to officially unveil a new monument to their heroism .

Further information about the original attack on the fort and the burring of the town can be found at: http://www.eighteentwelve.ca/?q=eng/Topic/42