The Battle of the Chateauguay was an engagement of the War of 1812. On 26 October 1813, a British force consisting of 1,630 regulars, volunteers and militia from Lower Canada and Mohawk warriors, commanded by Charles de Salaberry, repelled an American force of about 2,600 attempting to invade Lower Canada and ultimately attack Montreal.

The Battle of the Chateauguay was one of the two battles (the other being the Battle of Crysler's Farm) which caused the Americans to abandon the Saint Lawrence Campaign, their major strategic effort in the autumn of 1813. 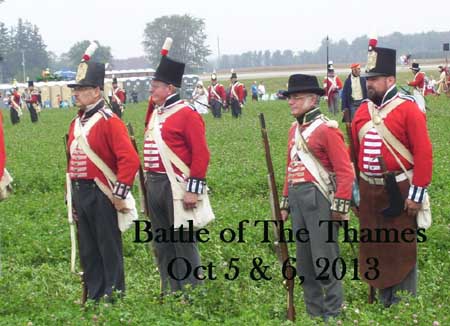 While some of our members headed east to the Battle of Chateauguay for their 200th anniversary, others headed west to Thamesville for the 200th anniversary of the Battle of The Thames.  It was at this battle that Tecumseh lost his life.  The Royal Scots are to be thanked and commended for setting up this anniversary event.Their Education Day was extremely successful.  93 buses were needed to get the students to the site.  As we were a small force, we joined in with the Royal Newfoundland Regiment and took to the field with them. 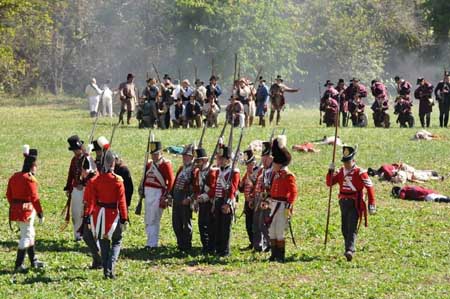 Each year a few of our members make the trek to Marion Indiana to the annual Battle of Missisinewa.  We are always well received.  Sutlers from all throughout Canada and the US attend providing a chance to update kit and clothing! This event recreates the original conflict between the forces of the US and the Natives of the area who were aligning themselves with their British protectors. 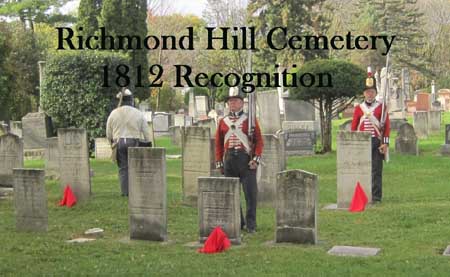 Five important citizens of early Richmond Hill have been recognized and will be honoured for their service with the 1st Regiment York Militia during the War of 1812.

A national project that is unique in Canadian History is underway to honour veterans of the War of 1812.  The Government of Canada is funding this project through the Canadian Heritage 1812 Commemoration Fund.  The purpose of this project is to ensure that War of 1812 veterans are awarded the recognition that they deserve, not only in the defence of Canada, but also for their dedication in building the foundation of the Canada that we live in today.

This project will map and identify the veterans of the War of 1812 and mark their graves with a bilingual black granite plaque so all Canadians can honour their service to our nation in this pivotal nation-building conflict.  Details of the project and of these local heroes can be viewed at www.1812veterans.ca, a website dedicated to providing a searchable data base of the biographies of War of 1812 veterans for the use of students and researchers alike.  Each plaque placed at a War of 1812 Veteran's grave site across Canada will relate to corresponding biographies that tell the stories of these early Canadian heroes along with the location of the grave on the website. Members of the Incorporated Militia of Upper Canada, The York Militia, The 49th, and The Nancy Gun Crew were on hand to provide honour guards and military salutes.

As expected local Federal, Provincial, Civic and Richmond Hill Presbyterian Church officials and dignitaries were present to each unveil one of the five plaques at the ceremony. Descendants and members of the general public were encouraged to watch and attend this most historic plaque unveiling