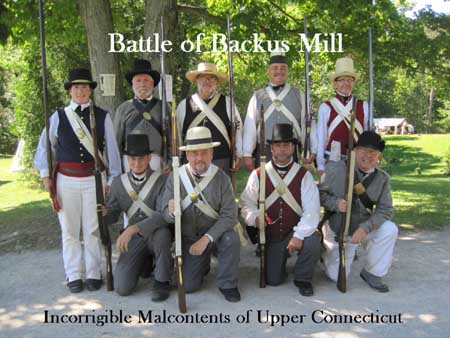 Each year, The Incorporated Militia of Upper Canada dons the grey roundabouts and takes the field under US Command.


We have done this each year at Backus Mill so that other groups who are often called on to portray US forces can go on the field as British/Canadians.  Under the command of Tom Hurlbut and Phil Edwards, some truly creative scenarios were presented.  It always seems a little strange going up against the line of redcoats, especially since we are usually a part of it !


Robin De Cloet and the staff and volunteers at Backus Mill always make us feel very welcome.  Nothing is too much bother!


The 1798 Backhouse Mill was one of the few grist mills in the area not burned during the War of 1812. It's a miracle the Mill survived. Flour itself is highly flammable and during the War 1812, many mills along Lake Erie were burned to the ground. There are a number of stories as to how the Backhouse Mill escaped destruction. Maybe it was the bonfires set by the Norfolk Militia to fool the American troops into thinking the Mill was already burning. Maybe the Americans were sympathetic to Backhouse, a fellow Mason. Perhaps the American troops simply did not find the mill. Whatever the reason, the Mill went on to serve the community for almost 160 years. Today, Backhouse Mill is a National Historic Site, operated by the Long Point Region Conservation Authority. 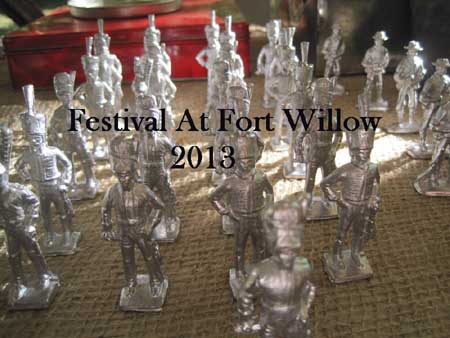 The Willow Creek Depot was a very busy spot 200 years ago on the portage route from Lake Simcoe to Lake Huron.  By getting supplies to the Notawasaga River and into Georgian Bay, the British were able to supply their forces all the way to Sault Saint Marie! 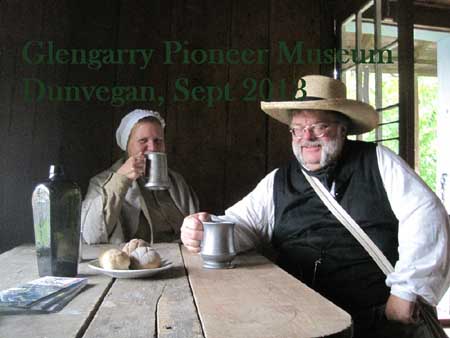 Just north of Cornwall and south of Ottawa is a small community called Dunvegan.  The prized possession of the area is the Glengarry Pioneer  Museum.

Each September they host a War of 1812 event for the local community and schools.  It is a 5 to 6 hour drive for most of us but the reception we get is well worth it!  Jim Mullins and the volunteers of the museum pull all the stops making us feel very welcome.


The Glens were there, of course, as were the 19th Dragoons, the Voltigeurs from the Montreal area, the Grenville Militia and The Incorporated Militia of Upper Canada. Several sets of sutlers and artisans also helped animate the site.

Unfortunately the weather did not cooperate as well on Saturday and Sunday as it had for the school program on Friday.   A steady rain Saturday afternoon and evening only slowed us down a little bit!  The Star Inn, the oldest public house in continuous use in Ontario is located in the village.  It made the rain seem not so bad after all!