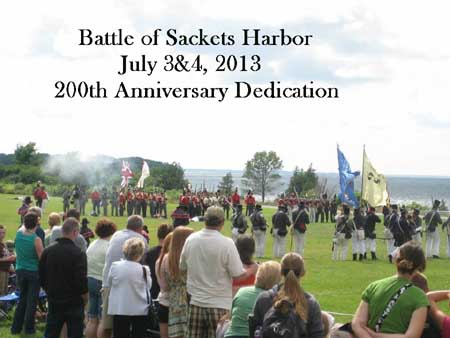 Two hundred years ago, a battle took place between the United States and Canada/Great Britain in Sackets Harbor and to commemorate the historic fight, the Sackets Harbor Battlefield Alliance hosted a "War of 1812 Weekend.”

YNN's Carmella Mataloni was at the event and gave us a written glimpse into the past.


SACKETS HARBOR, N.Y.--It all started bright and early Saturday morning on the Sackets Harbor Battlefield. Swarms of men dressed in uniform and women in old fashioned dresses. .It was all part of the villages War of 1812 Weekend and the Bicentennial of the Battle of Sackets Harbor.


"It's for local history so it is a local thing and it is to commemorate what actually happened here in the North Country and bring more awareness to that," said Theodore Schofield, volunteer.

The day started with artillery drills along with cannon and musket firing. Spectators got the chance to see what life was like during the War of 1812 by walking through all the different tents and stations that were set up across the battlefield. Many people stopped by to witness the action. They say it's interesting to see such a big piece of history first hand.

"It's pretty amazing just to see how people used to live and also to see the different utensils that they used and to actually see them on the battlefield," said Tracey Taylor, Walworth resident.

While the drills and cannon firing drew quite a crowd, it was the battle demonstration that kept everyone's attention. The United States and Great Britain met once again on the battlefield.

"I think America has got a very vital history and it is important to remember our beginnings and how we got there and continue to experience history as much as possible," said Terrell Snyder, Ohio resident.


At this year's event, in order to remember those Crown Forces that were killed during the battle, a stone memorial was dedicated in their honor on the battleground.

The monument is meant to honor the members of the Crown Forces killed at the Second Battle of Sackets Harbor on May 29, 1813, and buried on the battleground. A comprehensive list identifies 42 members of the 1st Royal Scots, 8th Foot, 100th Foot, 104th Foot, Royal Newfoundland Fencibles, Nova Scotia Fencibles, Glengarry Light Infantry Fencibles, Royal Navy, and Voltigeurs Canadiens.

Overlooking Black River Bay at the eastern end of Lake Ontario, an engraved granite monument rests prominently where visitors may reflect and contemplate the battle and those who fought, died, and are buried on the battlegrounds in an unknown location. Completing the memorial setting is a large granite ledger engraved with the name of each of these men, with his rank and unit.

While this monument will commemorate these men, and the noble cause for which they died, we hope it will also provide visitors with a better understanding of the historical heritage shared between the United States, Canada, and Great Britain.

The video from Sackets Harbor Monument Dedication can be found at: 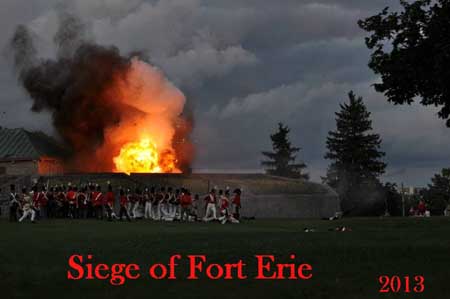 This past weekend, was the 199th anniversary of The Siege of Fort Erie.  The Incorporated Militia was out in strength and successfully aided the Crown Forces in winning back the fort from the American invaders, again
The Fort Staff and Volunteers as well as the Crown Forces are to be complimented for another well run, safe event.  Everything is in good order for next year’s 200th anniversary.

Background information about the battles can be found at:

We are just back from a very successful 199th anniversary of the Sinking of the Nancy in the Notawasaga River in Wasaga Beach Ontario. This is always a very well run event, with soldiers, sailors, gunners, Natives, sutlers and civilians coming together to remember the Nancy and her role in our Canadian History.


Dave Brunelle and the two companies of Royal Newfs along with the volunteers and staff of Nancy Island are to be commended for organizing such an exciting, action filled weekend.   It is never dull at The Nancy!  The set the standard for hospitality very high!


Congratulations to our own Cpl Kevyn Brown for winning his first Iron Soldier Trophy.
We are all looking forward to next year’s 200th anniversary where we will see exactly how many re-enactors can fit onto the island!


More information about The Nancy can be found at:

The Tall Ships in Penetanguishene – Aug 24-25 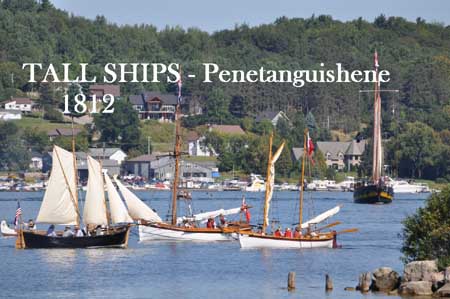 This past weekend the Tall Ships 1812 flotilla landed in Penetanguishene and Midland.  They and the smaller longboats, bateaux and war canoes of the 1812 community wowed the crowds for sure!  The 49th, The Royal Newfoundland Regiment, The US 22nd and representatives of the Canadian Volunteers and Kentucky Riflemen helped to animate the site with demonstrations and skirmishes on land.  There was even a “Pirate Run” for the kids!  The ships were certainly the stars of the weekend and we were glad to be part of the celebrations!

The undisputed star of the weekend was the Flagship Niagara!  Even though it is the third replica, it still contains material from the original!

More on the Flagship Niagara can be found at: http://www.flagshipniagara.org/ 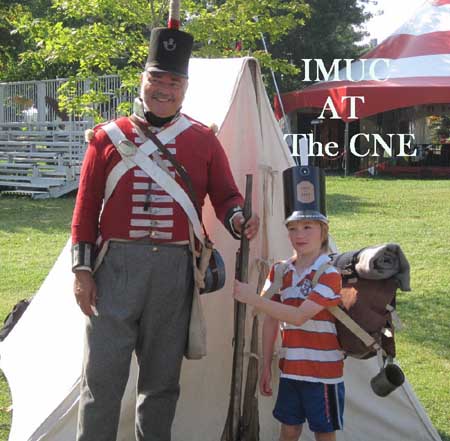 During the two Wednesdays of  the CNE this year, we manned the War of 1812 Booth in the Kids Zone at the CNE.  CNE staff had paper shakos and handouts and we provided contact, stories, facts and figures  and photo opportunities for the young and the young at heart!

Lots of questions, lots of hands on, lots of Kodak Moments.

We would like to thank all those members who gave up their time and wore wool in August to promote learning about this important time in Canada’s history. 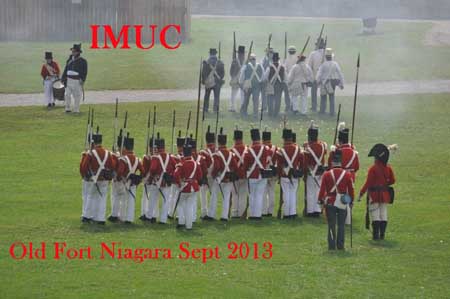 This past weekend, The Incorporated Militia of Upper Canada once again returned to Old Fort Niagara in Youngstown New York.  We portrayed local American militia on Saturday and returned to British Redcoat on Sunday.  What a great site for pictures during a battle!  The public were seated on the berm inside the walls and had the battle play out at their feet.  The fort staff and volunteers had erected interior barricades and buildings which further enhanced the scenarios depicted.  We were once again very pleased to be included!

Information about Old Fort Niagara can be accessed: http://oldfortniagara.org/

A link to photos from all of our 2013 events can be found at: