The original battlefield is under the St Lawrence Seaway, but it was close by.  On July 12 & 13 the Incorporated Militia of Upper Canada supported the Crown Forces in the three battles with the US Forces.  It was a hot weekend that is for sure with near record temperatures recorded.  Despite the heat , everyone was very pleased with the site, the scenarios and the reception given us by the Friends of Crysler’s Farm.


Further information about the site can be found at: http://www.cryslersfarm.com/


A short Youtube video c/o The Ottawa Journal can be found at: http://www.ottawacitizen.com/news/ottawa/Video+Battle+enactment/8657341/story.html 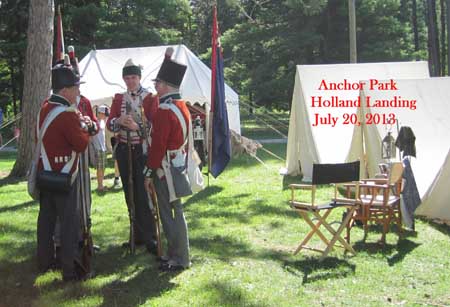 Destined to be added to a 44 gun frigate at Penetanguishene inlet, A large ship’s anchor was hauled all the way up Yonge Street by oxen, only to find out the war was over.  Left at the side of Soldiers Bay on the Holland River (Queensville Sideroad) , it was eventually taken to its current location in Anchor Park and later marked with a commemorative wood plaque.  The East Guillimbury Historical Society is proud of its efforts toward a renewed plaque that will be announced at the Muskets, Drums and Secret Tails event to commemorate this great anchor and important piece of our area history.


Fort Guillimbury  (Holland Landing) was the key settlement between where Yonge Street ended and the river journey began at Fort Nottawasaga (Wasaga Beach).


The Incorporated Militia of Upper Canada and our good friends the US 22nd, worked together to show a balanced view of the two sides during the War of 1812.


More on Anchor Park and The Anchor can be found at; http://www.1812bicentennial.com/anchor-park.html