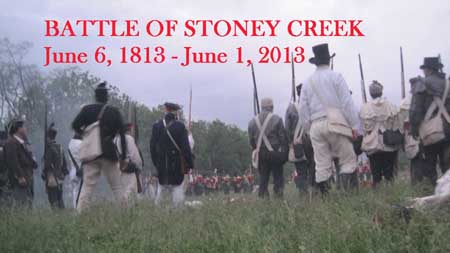 This past weekend, the Crown Forces of Upper Canada assembled on the grounds of Battlefield House in Stoney Creek for the 200th anniversary of the Battle of Stoney Creek.  Very moving tributes to those that had gone before us were given throughout the weekend.  The first was with the Canadian Legion at the Smith’s Knoll Memorial just outside the grounds.  On Saturday before the afternoon battle, the local dignitaries and politicians brought greetings from the rest of Canada.  At the end of the Saturday evening battle a very visual lantern light tribute occurred.  The ladies from the camps, brought lanterns onto the field to represent the fallen, extinguishing their lights as the names of the fallen were read.  Those on the field and in the audience were very moved.  On Sunday, tribute was given again to the fallen, but also those that have continued to keep the story and the memories alive.  Sue Ramsey of Battlefield House in particular was honoured by the re-enactment community.

We would like to thank Sue and all the organizers and volunteers for hosting this 200th anniversary and letting us be a part.


A collection of pictures from the Battle of Stoney Creek Anniversary re-enactment can be found at: 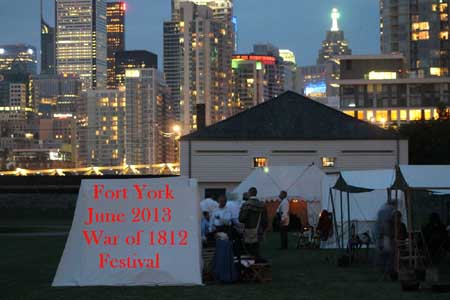 The troops assembled at Old Fort York this past weekend to help the site remember its part in the War of 1812.  In March of 1813, the Incorporated Militia of Upper Canada was formed by an act of the legislature.  By the time the Americans invaded the first time in late April, the Incorporated Militia were still without uniforms.  For the re-enactment this past weekend we donned civilian and military wear in our portrayal of the Incorporated Militia.  A military camp was set up within the fort and a host of sutlers and entertainers kept the action going between the battles. Fort staff and volunteers did a superb job keeping us watered, fed, and safe!  The public attended in droves,  with hundreds around for the battle scenarios.  Like 200 years ago, we didn’t do that well! It may have originally been an American victory, but eventually, events went our way!

More on Old Fort York and the Battle of York can be found at: http://www.historicplaces.ca/en/rep-reg/place-lieu.aspx?id=3677

An article on Victoria Square can be found at: http://torontoist.com/2013/03/historicist-attempting-to-remember-the-war-of-1812/