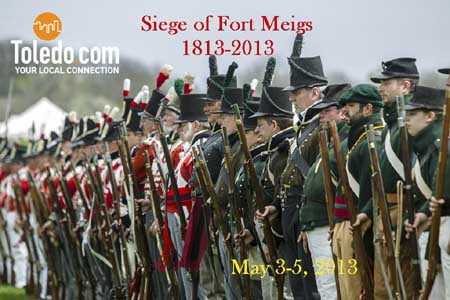 This first weekend of May usually sees us at the Battle of Longwoods outside London Ontario.  As this weekend is the Anniversary Event for The Siege of Fort Meigs, Longwoods was cancelled and our Troops and Campfollowers headed south.  All of those attending would like to thank the organizers for a very well run event.  It was certainly worth the drive and effort to support Fort Meigs on their Bicentennial Anniversary of the War of 1812.

Background information about the siege can be found at http://www.mywarof1812.com/battles/130428.html

The photos on our Flickr site are c/o Paul, Darlene and the 3 year old Sophie-cam!  Others have been gleaned from the social networks . As more become available, the set will be expanded . 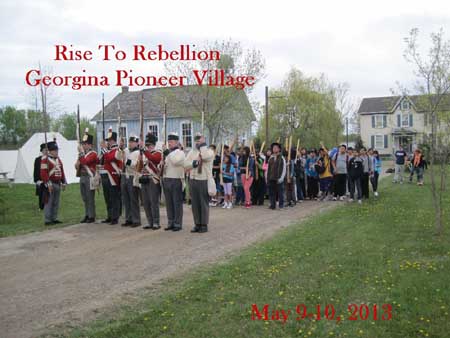 Part of our role as re-enactors is to support history education and programs.  One of these programs is the Rise to Rebellion 1837 school program at the Georgina Pioneer Village in Keswick Ontario.  The Incorporated Militia of Upper Canada although disbanded in 1815, was recalled in 1837 to help with the Rebellions.  IMUC was involved in three of the 9 1837 related stations and the recreation of McKenzie’s flight from the Family Compact!

Along with the 22nd US who portrayed the Rebels, we were joined by the other volunteers at the Village to explain what were the causes , effects and results of the Rebellion.  William Lyon McKenzie and Sir Francis Bond Head were in attendance and they “fired up the citizens” with their rhetoric!  This 2 day event,  was supported by schools from York and Durham counties. 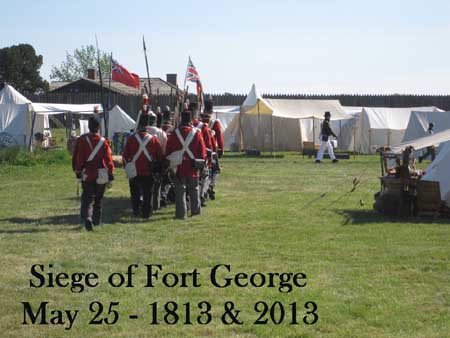 Exactly 200 years ago the Siege of Fort George resulted in Fort George coming under US hands.  This past weekend the 1812 Re-enacting Community assembled at the fort to recreate this important event in Canadian History.  The Siege of Fort George was very well attended with members coming from as far away as Texas!  The site put on a audio visual live action summary of the Siege using the grounds and blockhouses as back drops!  What as show!!!  11 cannons represented the American siege and thrilled the re-enactors and the public.  The finale included fireworks that went on for half an hour!  Both days were sunny and dry making it ideal weather for wearing wool!!

We would like to thank the Fort George staff and volunteers for a first class, extremely professionally run event.

More information about Fort George can be found at their site: http://www.pc.gc.ca/lhn-nhs/on/fortgeorge/index.aspx

Video highlights of The Battle of Fort George 2013: