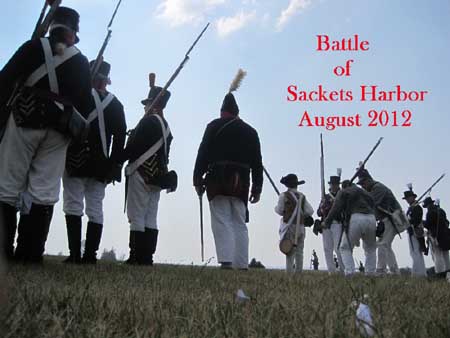 
We would like to thank Connie, Andrew and all the staff and volunteers at Sackets Harbor for taking such good care of us all, especially in the heat. 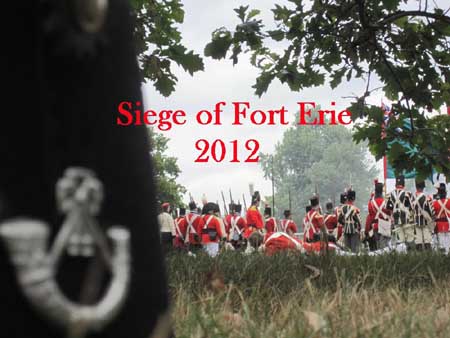 Despite the call for rain, the weather held all weekend, allowing for one of the best attended Sieges of Fort Erie ever.  The surrender, siege and assault on the fort, saw participation from full units on both sides.  The Crown Forces could barely fit onto the field!  We would like to thank Jim Hill, his staff and volunteers for again hosting this premier 1812 event.  Where will we put everyone in 2014?!

A highlight of the weekend for the Incorporated Militia of Upper Canada was our Saturday evening regimental dinner with our honoured guests, the 23rd US Infantry.

From the St Catharine’s Standard
http://www.stcatharinesstandard.ca/2012/08/12/history-comes-alive-at-old-fort-erie

This past weekend was the 198th anniversary of the sinking of the Nancy and the 10th anniversary of Wasaga Under Siege.  The Incorporated Militia of Upper Canada participated along with the Royal Newfoundland Regiment – Armstrong and Bulger Companies, ,  and members of  The 104th New Brunswick, 4th Lincoln, 89th Grenadiers, Caldwell Rangers, Glengarry Light Infantry,  the  22nd US Infantry, Provincial Marines,  The 16th New York,  1st US Rifles,  Canadian Volunteers,  HM Schooner Ferret, Lake Simcoe Squadron,  Nancy Gun Crew, Royal Navy Gun Crew, HMS Lynx Crew, On-gwe-ho-way and the Metis Nation of Upper Canada.

We started assembling on Nancy Island on the Tuesday with official events Friday, Saturday and Sunday.  A skirmish on the beach on Friday was followed by two tacticals on Saturday and another on Sunday.  Our hosts, The RNRs – Bulger’s Company – pulled out all the stops to make sure we were all taken care of.  On going demonstrations that included muskets, cannons, candle making, music, black smithing, surgery, Native Drumming, Metis Dancing, a Ladies Tea and a raid on the town all made for a very busy schedule.  We would like to thank the staff and volunteers of Nancy Island Historic Site and Dave Brunelle especially for a  great anniversary event! 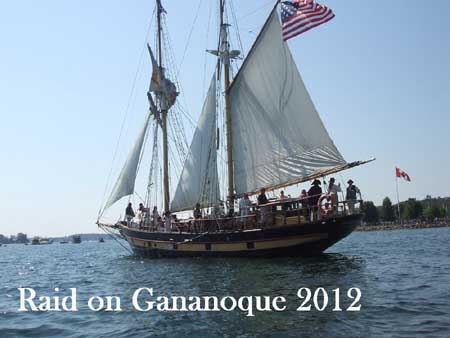 This year’s Raid on Gananoque commemorates the Raid 200 years ago that was  amongst  the first events of the War of 1812 in Canada.  US troops came across the St. Lawrence River on September 21 1812 and caused havoc.  Two engagements on the river and the Battle at the King Street Bridge were part of the weekend activities.  Canadian units both redcoat and militia were able to take on US units representing Forsythe’s Rifles form the Ogensburgh area.

The Incorporated Militia of Upper Canada would like to thank the Gananoque organizers and volunteers, especially our host Sharon Miller.

1812 Facts and Legends from Gananoque http://www.yourlocalheritage.ca/Report.php?ListType=Documents&ID=2767 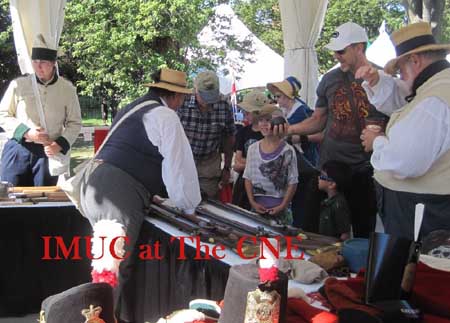 Wednesday found the Incorporated Militia of Upper Canada and Campfollowers at the CNE in the Kid Zone! We were there to add a little "colour and animation"! We brought kit and stories to share with the kids and their parents. CNE staff, assisted by assembling paper shakos - over 800 - and dressing the children in redcoats and green jackets for photo opportunities with "real live re-enactors!" Not sure who had more fun, the kids or IMUC !