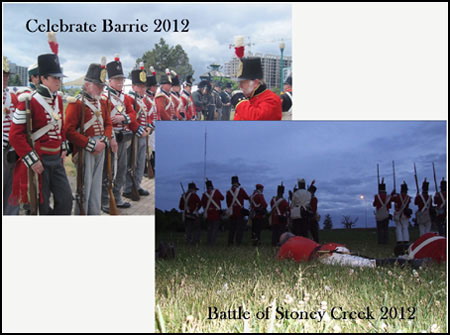 With the Bicentennial events and celebrations well under way the Incorporated Militia of Upper Canada looked like it had to choose between two well-loved events, the 199th Anniversary of the Battle of Stoney Creek and the 2012 Celebrate Barrie Heritage Days. For the first time we split our forces and supported both events.

From all regimental reports, this year’s Battle of Stoney Creek was spectacular!  The smiles exhibited by our three new members attending their first Crown Forces event, tell it all.  We would like to thank Battlefield House, their staff and volunteers for organizing another excellent weekend.  All the members of The Incorporated Militia of Upper Canada look forward to next year and the 200th anniversary of the Battle of Stoney Creek.


As the Battle of Stoney Creek was unfolding just south of Lake Ontario, the other half of our regiment was supporting the Glengarry Light Infantry and the Royal Newfoundland Regiment at Celebrate Barrie’s Heritage Days.  A full weekend  of pillaging, drill, cannon firing, naval manoeuvres also included the Regular Canadian Military’s Parade in Barrie.

At this formal military parade the 1000 plus Regular  Canadian Forces members  from Base Borden were given the “Freedom of the City”.  The Mayor formally presented Base Bordon’s  commanding officers with the “Key to the City of Barrie”.  Despite the sometimes  “damp” weather, hundreds attended and learned much about our important Canadian heritage. We would especially like to thank Dave Brunelle the event coordinator. 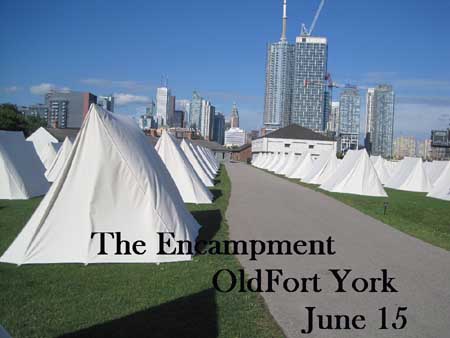 As part of “Luminato” http://www.luminato.com/events/encampment/ 200 wedge tents were set up inside Old Fort York to represent the 200 years since the start of the War of 1812 in Canada.  Many of the tents held interpretations of the people, places and events from this time period.  On Tuesday June 12, while our CO was greeting visitors at the front gate, several members of the Incorporated Militia of Upper Canada also visited and checked out the installation!  There was definitely some “canvas envy” but our presence was well received by volunteers and visitors alike.  There certainly were lots of chances for “photo ops”!

Congratulations to one of our own, Thomas, who as a result of a winning entry in a provincial history fair, got to meet and explain the role of the War of 1812 in Canada’s history to our Lt. Governor, David Ontley.

Once again it was gratifying to see Fort York be a centre of attention in this busy, busy city! 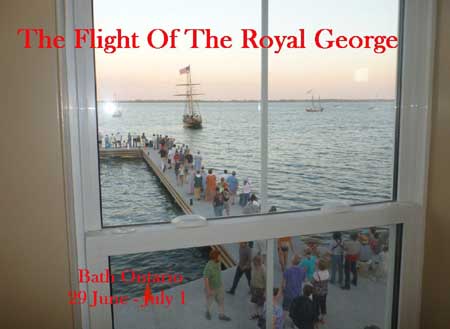 Canada Day 2012,  found the Incorporated Militia in Bath Ontario as the guests of the Canadian Fensibles.  Dave Smith, The Fensibles and the many volunteers in Bath Ontario pulled off a Canada Day to remember!!!l  Four Tall ships, 10 longboats and bateau, three roasted pigs, a flyby by the Snowbirds and even a regiment  from England (The 44th) , made for a grand event.  The town filled with spectators to watch battles on land, through the streets and on the water.  Dave and the Fensibles covered it all!

The 44th Regiment of Foot