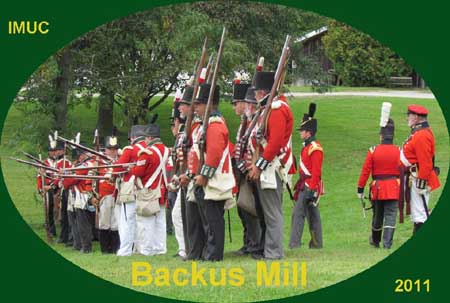 As always the Norfolk Militia, The Canadian Volunteers and the staff and volunteers of the Backus Mill Conservation Area near Port Rowan pulled off another phenomenal event.  The site could not have been more accommodating!  This year we again portrayed the “Incorporated Militia of Upper Connecticut” helping to bolster the American Forces on Saturday.  On Sunday we were needed as Canadian red-coated militia, to balance the sides and make for a successful event.

During the original War of 1812, Backus Mill was missed as the American forces moved through the area.  The reasons are open to a lot of speculation.  Were they missed, or were they spared?? 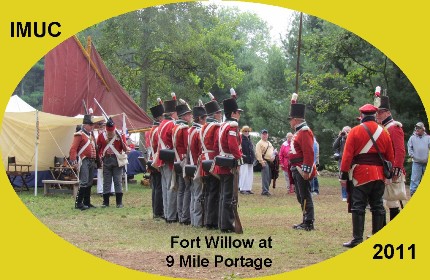 This past Friday and Saturday  with the invitation of The Royal Newfoundland Regiment, and The Friends of Fort Willow we joined many other members of the 1812 community in helping  the township of Minising with the Education Day at Fort Willow.  Period artisans, entertainers, surgeons, ship companies, cannon crews, and period civilians set up activity stations throughout the property.  Dave Brunelle and his crew of volunteers worked long and hard to coordinate all the activities and students.  Over 1000 local area school children participated in half day sessions that included weapon demonstrations, nautical tactics, candle making, 1812 military drill and storytelling.  The enthusiasm was high and the audience very appreciative.

Strategically located as a supply depot during the War of 1812, the Fort Willow area was also actively used for centuries by our Aboriginal peoples, the fur trade and French explorers as part of a major transportation route known as the 9 Mile Portage. Recent restorations have located and outlined the buildings used by the soldiers.

The Nine Mile Portage is an aboriginal transportation route that existed centuries before Europeans came to Simcoe County. The portage linked Kempenfeldt Bay through Willow Creek, connecting Lake Simcoe to the Nottawasaga River which flows into Georgian Bay off Lake Huron.  The portage was adopted by the British Military as a key piece of their supply line during the War of 1812.   In 1814, Kempenfeldt Bay (Barrie) and Willow Creek (Fort Willow) became supply depot landings handling goods and arms from  York  (Toronto), north to the naval dockyard at Penetanguishene. 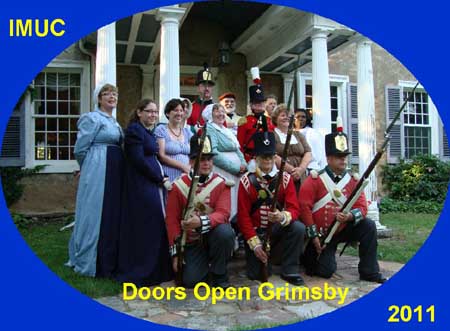 This year members of the Incorporated Militia of Upper Canada, especially those involved with our museum display, surgeon and period dancing were present at the Doors Open Grimsby event held at the 1812 INTERNATIONAL PEACE PARK in Grimsby. This location was the site of a small engagement on June 8, 1813, following the American retreat from their defeat at Stoney Creek. Two companies of IMUC were involved in this affair.


The town organizers also issued an invitation to provide a special tour at the end of the day to attending members to visit the Nelles Manor, a short distance away. This is an original 1812 period home (still occupied) where a celebration ball was held at the end of the war. Those present were able to see an original officer’s uniform from 1812 found hidden away in the attic.  An original musket was also part of the artefacts found in the home.

Nelles Manor is considered to be the oldest inhabited dwelling between Niagara and Kingston.  It was built in the Georgian style by Colonel Robert Nelles, of locally quarried stone, over a ten year period (1788-98).  Built facing north and Lake Ontario on an old path called Squire Nelles' Lane, the main entrance was later moved to the south on the other side, with a pillared porch facing on to the new Stone Road (now Main Street).

A Loyalist from the Mohawk Valley, New York, Robert Nelles and his father and brothers were among the first to settle at The Forty (Grimsby) following the American Revolution.  This home served as Nelles' residence during his lengthy career as Justice of the Peace, Member of the Legislative Assembly and Commander of the 14th Lincoln Militia.

Colonel Nelles' office was a small room on the north side, where he performed many marriages before clergy were available. The house was a centre for gala events and remained in the Nelles family possession until 1963, when it was purchased by its current owners.  Restoration is an on-going project in this warm welcoming home, with its seven fireplaces, walnut woodwork and spacious halls and rooms.
Our members were very appreciative of this genuine link to our historic past.

Further information can be found at 1812 INTERNATIONAL PEACE PARK: 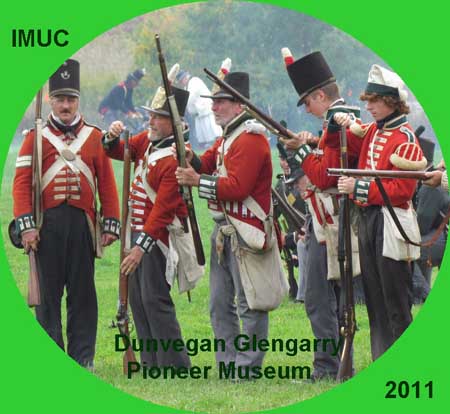 Dunvegan is a small town south of Ottawa near the Quebec border.  The Incorporated Militia of Upper Canada were present this year again along with the Canadian Fensibles based in Ottawa and the Glengarry Light Infantry. This small event draws great interest from all the local residents.  The site looks forward to their 1812 weekend and the animation that it gives the village.  Having Ontario’s oldest working public house helps make the long drive definitely worth the time involved!!

We would like to thank the village and the host Glengarry Light Infantry for their very warm reception.