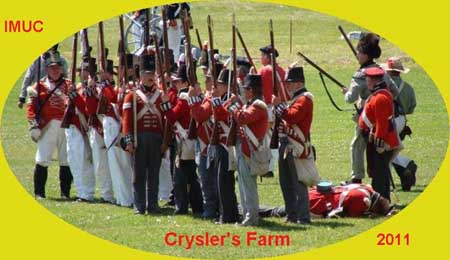 This past weekend The Incorporated Militia of Upper Canada participated in the Battle of Crylser’s farm organized by “The Friends of Crysler’s Farm”.  This is one very important battle that we try to support each year it occurs.  This year the weather cooperated for a change!  Along with the battles, one of the highlights of the weekend was when one of our Campfollowers was able to assist the bakers in the Village with their daily bread making!

As always we would like to thank the staff and organizers for the warm hospitality, the great dinner and the very hearty welcome.
Special thanks to Carol Whelan for providing the pictures. 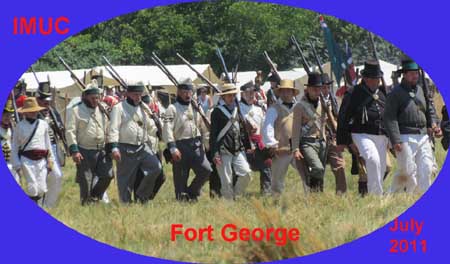 What a scorcher!  This past weekend at Fort George in Niagara-On-The-Lake saw the Incorporated Militia’s support this very important event.  Fort George was a pivotal site in the War of 1812.


A highlight of the weekend was the witnessing of the dedication of the 41st Regiments newly minted Colours.  We will to again congratulate the 41st on their new acquisitions.  They truly are beautiful.


As the numbers on the US side were a little short, The Incorporated Militia of Upper Canada aided their side to help balance the numbers.  Different groups have done this at events to assist the organizers.


We would like to thank our hosts and Peter Martin especially for organizing, yet again, a stellar event. 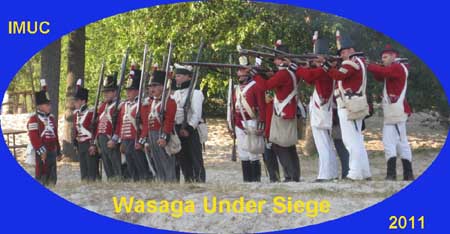 Another scorcher!  With temperatures into the 40s (Celsius) the staff of Nancy Island, The Friends of  Nancy Island and The Royal Newfoundland Regiment hosted another successful “Wasaga Under Siege”.  While gunboats from the US and British navies battled on the water, infantry forces of the two sides engaged each other on the shore and in the dunes!  Despite the heat, the British and Canadian forces were victorious once again.  Though one of the smallest sites in our yearly list of events, it certainly has the biggest heart!

On Sunday July 24, representatives of the Incorporated Militia of Upper Canada were present at the 175th anniversary service at St James On the Line Anglican Church in Penetanguishene Ontario.  We acted as an honour guards for the attending Ontario Lt. Governor, David Onley.  St James On The Line was originally constructed by the men stationed at the Naval Establishment in Penetanguishene.

St James On The Line :
http://www.historicplaces.ca/en/rep-reg/place-lieu.aspx?id=10578 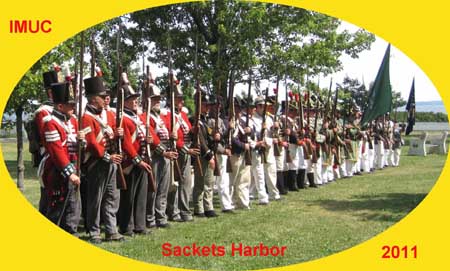 Sackets Harbor once again hosted an 1812 event that included many units from the US and the Incorporated Militia of Upper Canada (with one Glengarry Light Infantry member)!  We would like to thank Connie Barone, Andrew and all the staff and volunteers from the Sackets Harbor Battlefield for once again making us feel very welcome.  Such a beautiful site should not be missed.   We would like to also thank the “Canadian Volunteers from Batavia New York” for bolstering our forces this weekend.  The battle on Saturday afternoon did not go so well for the Redcoats but we more than held our own on Sunday.  The weekend included a naval seige by three “British” vessels and concluded with a joint wreath laying at the monument raised to commemorate the efforts of the soldiers from the War of 1812.

More information can be found at :