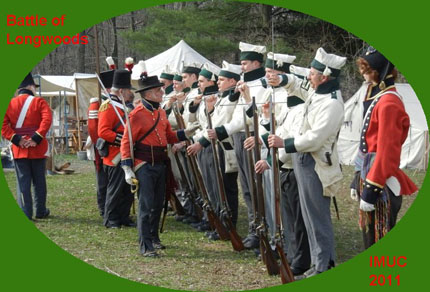 The Royal Scots Light Company have done it again!  The re-enacting season has officially started at the Longwoods Conservation Area, just outside London Ontario.  Each year we anxiously anticipate the Battle of Longwoods, knowing the battle scenarios will be imaginative and the weather “typical” for the early spring.  We were not disappointed this year with either.  Saturday’s battle afforded the six British/Canadian regiments to work almost independently against the enemy.  The Sunday battle with the redcoats in column demonstrated the disastrous result from the original Battle of Longwoods.  Weather on Saturday cooperated fully, making it good “wool weather”!  Sunday the forcasted rain appeared on time but stopped long enough for the 2:30 battle.  The Royal Scots must have pull!!

Although the Incorporated Militia of Upper Canada were raised in 1813 and disbanded in 1815, they were recalled for the rebellions of 1837.  Due to this historical connection, the Incorporated Militia of Upper Canada proudly assisted the Georgina Pioneer village with their Return to Rebellion 1837 Education Days program.  As part of the forces loyal to the Crown we worked with the students, getting them ready for the confrontation between MacKenzie’s rebels and the loyalist.  Members of the 49th, the US 22nd and site staff worked with the rebels.  Everyone thoroughly enjoyed the two days.

The Incorporated Militia of Upper Canada travelled to Perrysburg Ohio, to Fort Meigs this past weekend.  Fort Meigs is the largest 1812 fort in the US.  Despite a little damp, the weather finally cooperated.  We all had a superb time and would like to thank the organizers of the event, The Old Northwest Military Association, for making us feel very welcome.  We all look forward to returning.

”Dispatch from the Head of the Lake Upper Canada”
Monday, May 30th

The staff at Fort Meigs deserve our thanks for their excellent hospitality, and welcome.

My hope is that all returned safely from the venture, in spite of serious weather in Ohio and Michigan on our journey home.”

“I am happy to report on the expedition of His Majesty's troops up the Miami River, Ohio, to lay siege at Fort Meigs and to engage the enemy in open battle.The inclement weather overnight did nothing to dampen the ardour of the troops and they fulfilled their duties in exemplary fashion, even though outnumbered.

I was privileged to have command of a force consisting of members of the 1st (Royal Scot) Regiment, Grenadier and Light Companies; The 41st Regiment; The 60th Rifles; The Incorporated Militia of Upper Canada, and reinforcements from the Regiment De Meuron and the Glengarry Light Infantry. Capt Dubbeld commanded a battery of artillery and Native Warriors assisted in the battles.
My thanks go to all participants, and especially the unit commanders, Captain Dennison, Colour Sergeant Stott, Captain Fournier, Sergeant Kelly, Sergeant Newfield, and Captain Dubbeld for their dedication in damp and muddy circumstances. Major Gilmour, of the Royal Engineers was a most supportive Adjutant.

On the Saturday we faced a superior force of the enemy, and were successful in taking the field, preserving the guns and forcing the enemy to offer themselves in surrender after suffering many casualties. On Sunday the fortune went to the enemy after a gallant and costly fight by His Majesty's force. The 41st paid dearly for their gallant maintenance of the centre and left wing, a feat which managed to preserve the guns from capture. In this they were accompanied by the IMUC. On the right wing, the light troops harassed the enemy well, but were unable to restrain their vastly superior numbers. They too suffered much at the hands of the disciplined enemy advance. I had no alternative but to accept the circumstances and to yield to the enemy.

During the conflict I suffered a wound to my left arm, but "it was only a flesh wound".
Our withdrawal was done with discipline and honour.
“I remain Your Most Humble and Obedient Servant
R. Hobbs Hon Col.Head of the Lake Upper Canada”