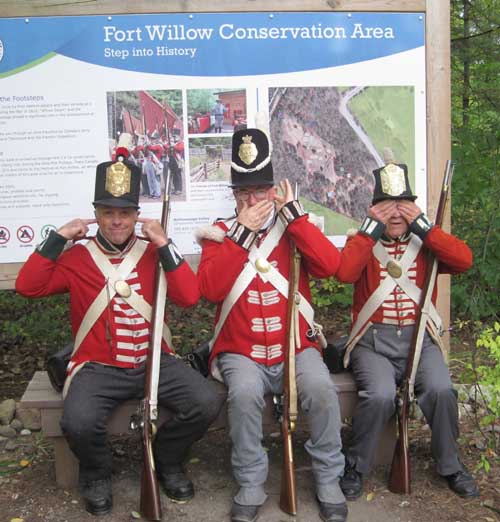 Each year we are invited by the Friends of Fort Willow and the Township of Minising to participate in the Festival at Fort Willow. On Friday, 1000 mainly grade 7 students from all over Simcoe County were expected. 1154 showed up with accompanying teachers, volunteers and parents! The US 22nd,The Canadian Volunteers, The Crew of the Nancy, The crew of the Revenge The Royal Newfoundland Regiment, Our Loyal Native Allies, and a lone Glen and 89th joined IMUC, our Campfollowers, the sutlers and early crafts people giving a taste of early Canadian life. A pair of Royal Dragoons also mingled with the visiting classes.

Pictures from the Festival at Fort Willow can be found by clicking here. 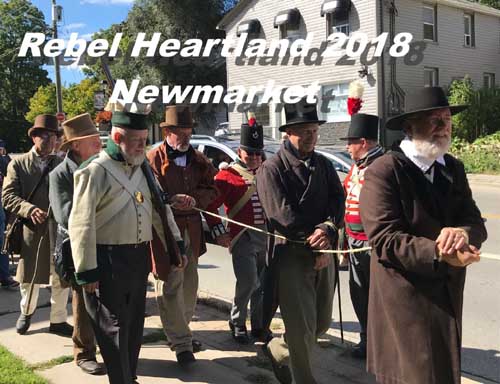 This past weekend we were in Newmarket Ontario portraying the Incorporated Militia in 1837! Despite being disbanded in 1815 after the War of 1812, The Incorporated Militia was recalled for the Rebellions. This week, The Lloydtown Patriots under the leadership of Samuel Lount and Jessie Lloyd were in town with William Lyon MacKenzie trying to organize/entice the citizens of Newmarket to join them on their march to Montgomery's Tavern. It did not go well for these early Canadian patriots.
The Nancy Gun Crew, The Royal Artillery, several good and loyal sutlers also added the Family Compact in unwisely defending The Crown against "the rebels"!

Photos from the well staged event can be found at: here The Battle of Backus Mill continues to be a perennial favourite of the Incorporated Militia.  The Village staff and the hosting Norfolk Militia always treat us well!  This year we took on members of the Canadian Volunteers, the US 22nd and the US 19th.  The Royal Scots, The 89th and a lone Glenny filled out the Redcoat line with us!

Brenda Lightfoot’s period dance workshop and calling at the evening barn dance was a hit again!

Some pictures from Backus Mill can be found here